Today we are exited to introduce another major milestone in the development of TagSpaces containing many new exiting features and improvements.

In version 2.0 of TagSpaces we have redesigned the user interface of the application following some of the material design paradigms. The user interface is now, at least in our eyes, much cleaner and sleek.

Technically we have also switched from a quite old Javascript layout library to a modern, responsive Flexbox based css layout. Which improved significantly the performance of the user interface. The old bootstrap theme was also replaced with a new one based on material design. Following these big changes we completely redesigned the list and the grid perspectives. The viewers for images, markdown and html files were also redesigned according to the new guidelines, giving you more working space by cleaning the user interface. The main difference to the previous version is migration of the top menu to a dropup menu, which can be activated by a round button in the right bottom corner of the perspective or the viewer.

We finally added a notification framework for the application based on the great noty projects. Now you can see in the UI a message after completion of operations such as file rename or delete.

A new getting started tour (based on hopscotch) is now shown after a fresh installation of the product, presenting you the main working areas of TagSpaces. The starting tour can be started also from the contact us panel, which can be activated by clicking the button on the right to the location navigator switcher.

We have added 3 new file viewer extensions to the TagSpaces. The first one is a so called audio video player, allowing the playing of OGV, OGG, MP4 and MP3 files. The last two formats are not supported in the native versions of the product due to license incompatibilities. The player is a based on the great open source plyr.io player.

The second viewer is a reader for ebook in EPUB format. With this viewer you can manage better your ebooks library, because it allows you the open and preview you EPUB file. It it also suitable for reading of ebook in the fullscreen mode, but the current implementation is rudimental, and we think the for the ebook reading use case there are better solutions. 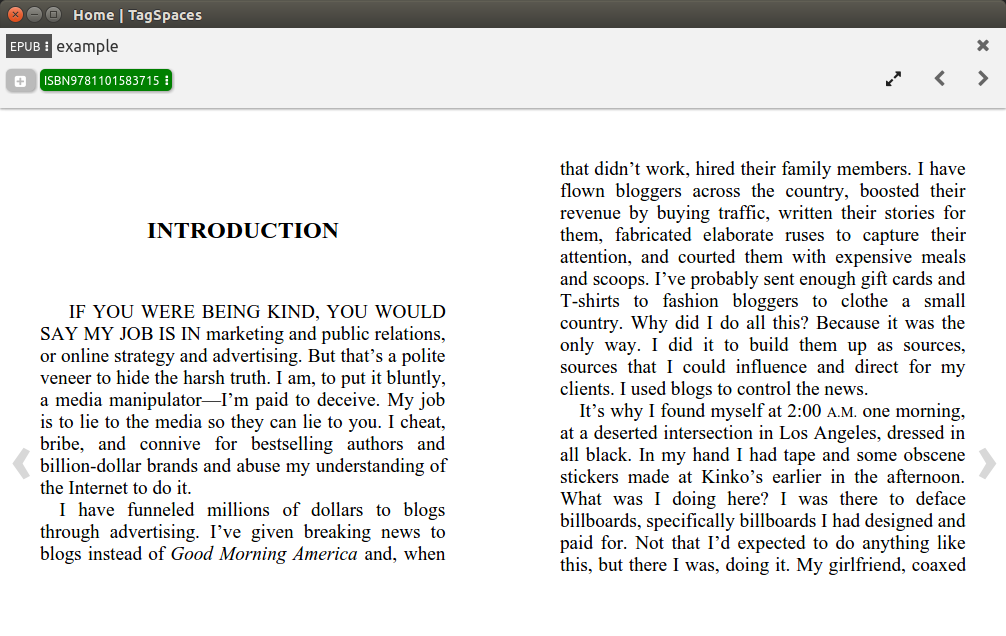 And third viewer we added in this release is the a viewer for ZIP files. The functionality here is also very basic, but if you have to manage many ZIP file for some reason, it can be quite usefull, because it gives you a preview of the ZIP container content. You can also preview files currently only in text format from your zip files. 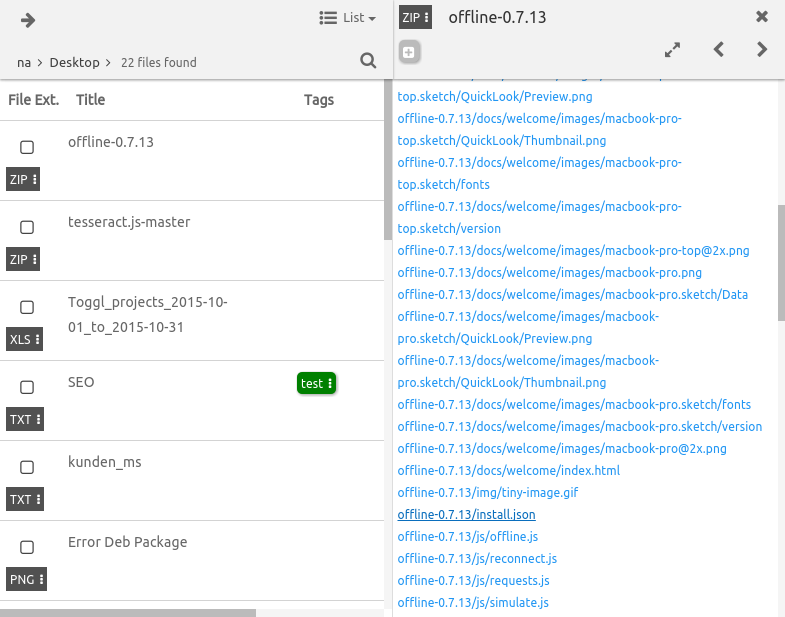 A startup location is as its names says the location in which TagSpaces starts by default. Every location can be made a startup one, simple by checking the switch in the Edit location dialog, as shown in the following screenshot. 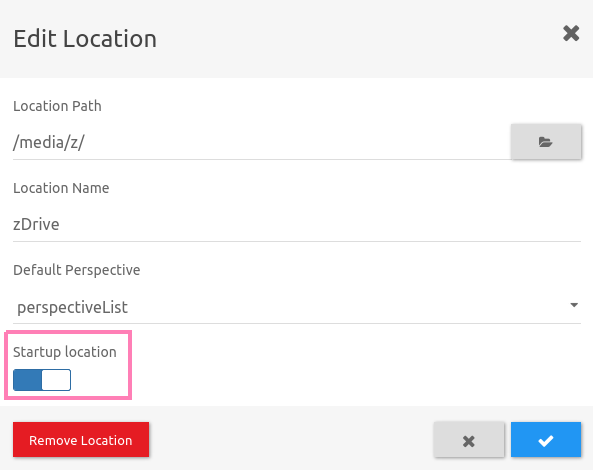 You have to activate this functionality in the general tab of the setting. If this option is not activated TagSpaces will start with last successfully opened location. You can have at ones only one startup location.

Finally it is possible to start TagSpaces in the so called portable mode. This is great feature for users who wants to use our product from an USB stick. The portable mode is currently supported for the Windows and Linux operating systems. To run it you have to execute the tagspacesp script on Linux or the tagspaces.cmd on Windows. Running in this mode, TagSpaces will use a folder called data for the saving of all tag groups and settings of the application. This folder is located in the same folder as the TagSpaces executable, so if you are starting from USB stick, this information will stay there, and not the host computer. You can also use relative path in for the locations paths, which will allow you to manage folders on your USB stick, just by referring them with their relative path.

Thanks to the great feedback, we receive from our users on github and usersvoice, we were able to identify and fix many usability issues. The following list will give you an overview of the major ones:

Changes in the Android app#

The Android version of TagSpaces features a new web runtime based on the Crosswalk project. This huge change enables us to support devices with Android version as low as 4.1. We can now use modern web technologies and test better the Android version, because it uses the same runtime across all devices. One drawback of this change is the increased size (~70MB) of the installed app on your device, caused by the integration of the whole Chromium engine as a part of Crosswalk.

In the paid version of the Android app, we integrate a new perspective called image swiper. This perspective can be used for browsing of folders containing mostly images, it actually shows only the images of the current folder. Based on the famous PhotoSwipe javascript library, it supports touch gestures, zoom animation and lazy loading of images.

We have also re-enabled the support of the Android's back button, which can be used as expected for backwards navigation in the app.

A long awaited feature from our Firefox users is the web clipper, similar to the one integrated in the Chrome extension. So finally we did manage to migrate the Chrome web clipper to Firefox. The users can now expect similar functionalities, like taking a screenshot from the current page or saving the current selection in a file. Only the saving in MHTML format functionality was not ported directly. As a trade off, we did implement the saving of the whole page as a single HTML file, containing all the images as data urls. 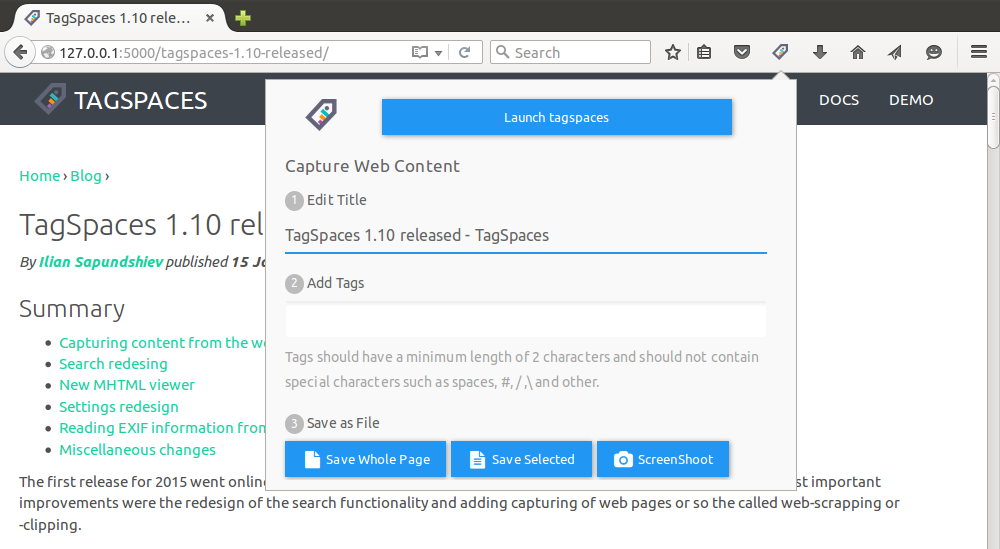 Here is a list of some other improvements which were included in this release:

I thing these are the changes so far, it will be great to hear some feedback from you!