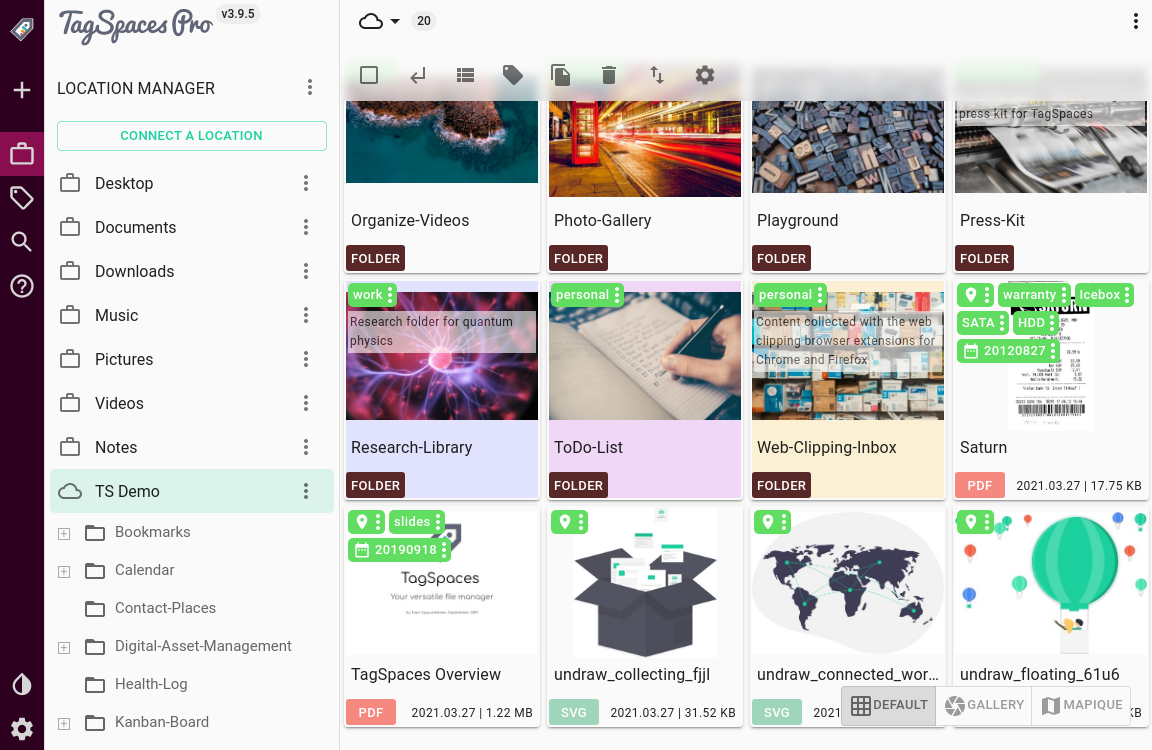 TagSpaces v3.9.5, our most advanced version yet, is now available, building upon and further improving the change introduced in previous releases.

Version 3.9.5. has seen its share of UI and UX improvements.

Menus have seen some important additions and changes. The option to “open parent folders internally” was added to the File menu, this is most useful for file and folder entries in search results. When in the Default or KanBan perspective, a right-click on an empty area will bring up the directory menu, and the locations context menu gained a “Close all locations” entry. 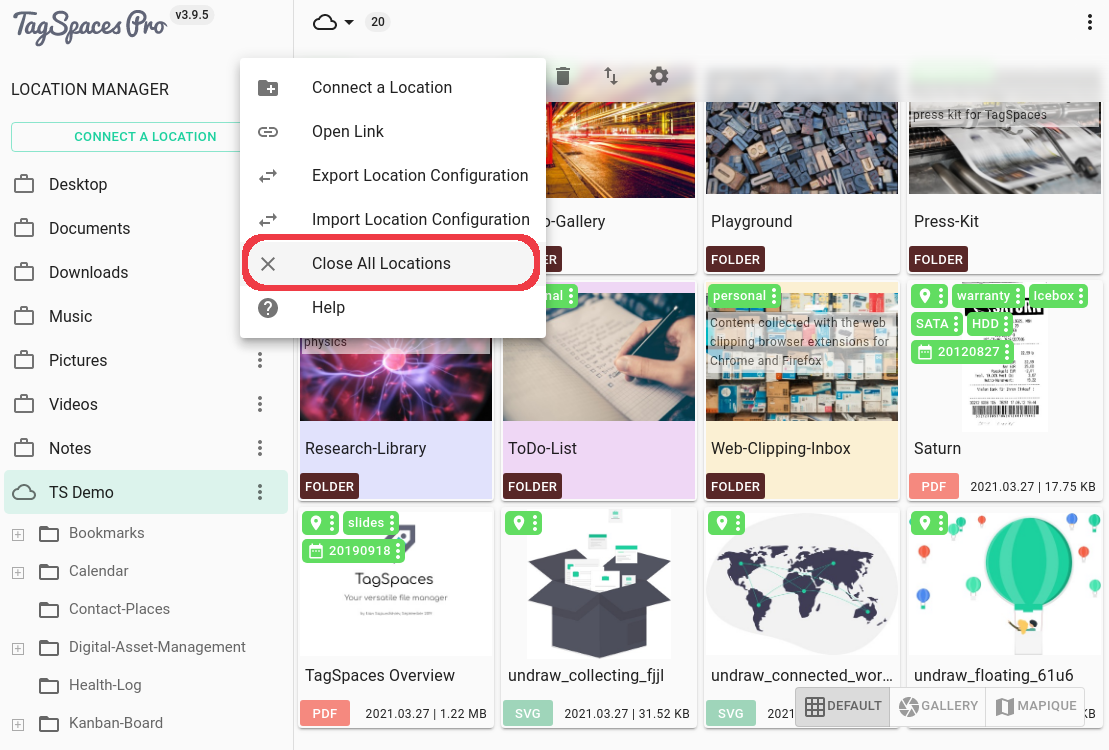 File context menus just got smarter too, now right-clicking a multi-file selection will take into account the selected file-types, and only show the relevant menu options. Many dialogues also got an extra close button now for easier dismissal.

Changing perspectives just got a lot easier in the PRO version with the addition of the new Switcher toolbar, that brings a serious usability improvement.

While the KanBan perspective continued to improve and got closer to production-ready, the Default perspective now has user-definable thumbnails for folders. When you right click a file, and choose “Use as thumbnail for current folder”, this file will become a cover image for that folder in the grid view, or gets displayed at the right-hand side in list-view, similarly to file preview images. This might seem most useful for image folders, but could be used for any kind of content. 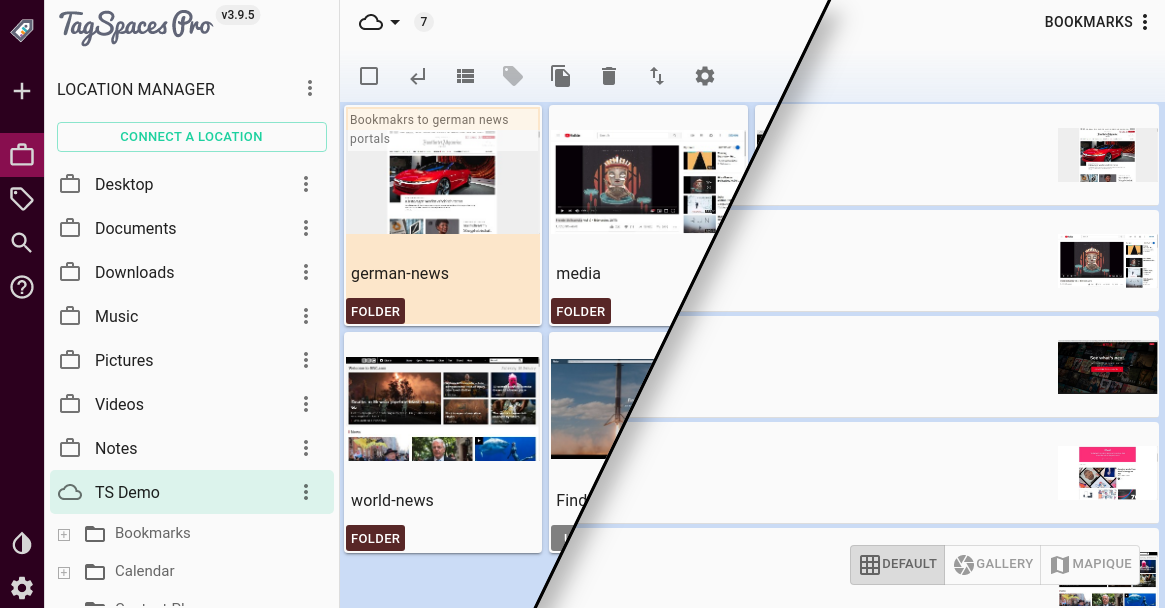 As a subtle change, the file and folder titles in dark mode have also been adjusted.

For PRO users, directory watching was adjusted to the new indexing strategy introduced in the previous version, as well as changes made in the sidecar file being reflected in the user interface, while Enterprise (not the spaceship) users can now a load tag library from dynamoDB.

Remote storage-related improvements in version 3.9 mainly affect the PRO and Enterprise versions: Now deleting non-empty folders is supported on remote file systems, and you can rename folders on object storages. Custom thumbnails, as seen above, work on remote storages too for PRO users, and the file-upload experience has seen an improvement.

As an under-the-hood improvement for remote locations, object storages now have an optional sessionToken parameter, which is useful for some connections to MinIO based bucket back-ends.

Meanwhile, the Enterprise version now has a login screen with Cognito support. 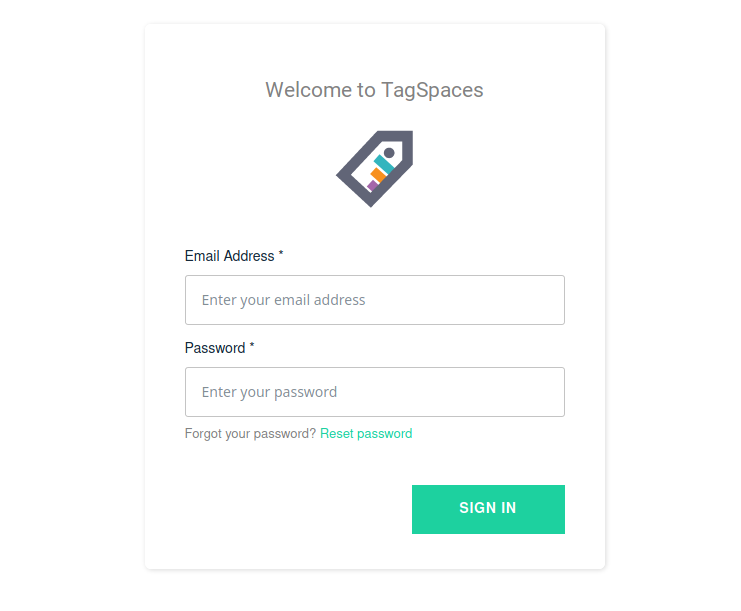 So, should you upgrade?​

If you have not already, the short answer is: Yes, you should. Most definitely should. Because why would you want to skip on all these cool new features? Until then, see you in the next release.