The first release for 2015 went online recently, so now it's time to describe what was added to the product. The most important improvements were the redesign of the search functionality and adding capturing of web pages or so the called web-scrapping or -clipping.

A long awaited feature requested by many users (which previously have used tools such as Evernote) was the ability to capture content from the web as files. So now this feature is reality in the Chrome/Chromium extension of TagSpaces. The button which was previously used for opening the application, now opens a popup menu, which give you the ability to open the application or to scrap the current web page. Basically you save the content in three different ways:

But before you save the content, you can add tags to this web pages. The tag suggestion are coming of course from your tag library in TagSpaces.

One big difference to previous release is that now the name of the parent directory is also considered in the search results. This feature should be welcomed by users who are missing tagging of the directories. They can now add a word to the name of a given folder, 'tagging' this way all the directly contained files, with this it.

A new viewer for MHTML files was also added, allowing you to preview MHTML files in TagSpaces. The preview currently is not perfect and should be improved in the next releases. You can still open the MHTML file in a new window with a button located on the top of the viewer. Opening of the MHTML file in a separate window opens the natively chrome/firefox viewer, which is currently a way better than the preview in TagSpaces. The reason we added the preview functionality is restriction of using of the native MHTML viewer in iframes on Chrome, Chromium(node-webkit) and Android.

The settings dialog was redesigned with a much cleaner interface. The checkboxes were redesigned with touch friendly slider controls. A new switch was added in order to enable or disable the main menu in the native application. Beside that the button responsible for the opening of the setting was moved from the bottom right part of the left application area to the top right part of the same area. 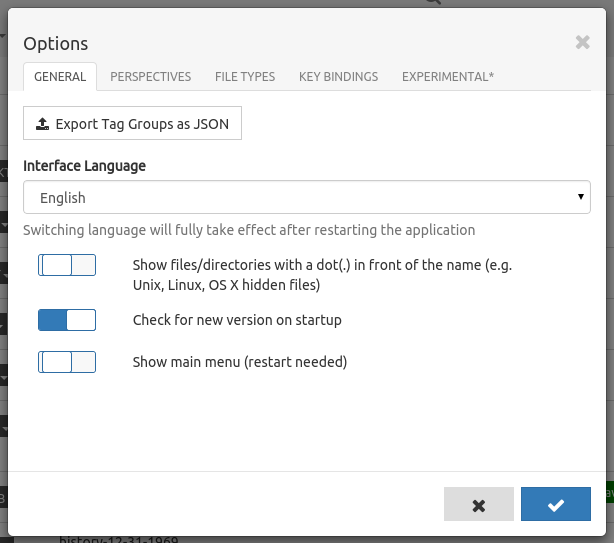 TagSpaces is now able to read EXIF information from JPG files. This feature is currently used only to rotate the images according to their EXIF orientation. Other feature based on the EXIF/IPTC information including tags will be added in the future.

On OSX the missing native menu was fixed. Allowing you use again copy and paste functionalities #174. Further more the Russian, German, French, Japanese, Slovak, Portuguese and Bulgarian translations were updated.