One major improvement coming with version 1.8.6 is the redesigning of the file edit functionality. Now you are not forced anymore to confirm every time the saving of a file. And if you have already edited some file, a star will appear behind the file extension, letting you to know this. Since the start is present, editing of title or adding of tags will be impossible until you save your changes.

There is also a new entry in the file create menu, allowing you to import a file to the current opened directory in TagSpaces. Technically this functionality is just copying the selected file in your current folder. This functionality is currently available only for the desktop version, and will come soon to the Android and the WebDAV versions. 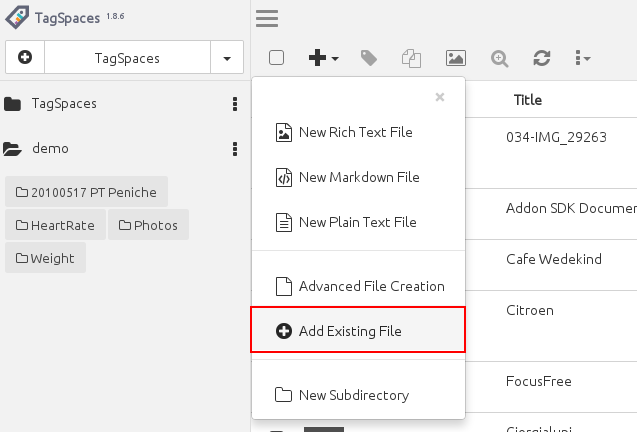 A feature requested from many users is the possibility to export of the tag groups from a TagSpaces installation, so it can be transferred to other devices. So now this is possible now in the general tab in settings dialog. There you will find a button called "Export Tag Groups as JSON". 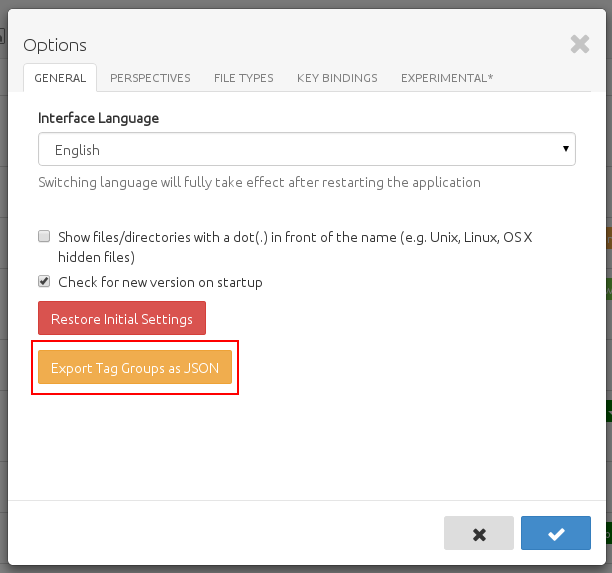 We implemented also a simple viewer and editor for JSON files, based on the json editor project. 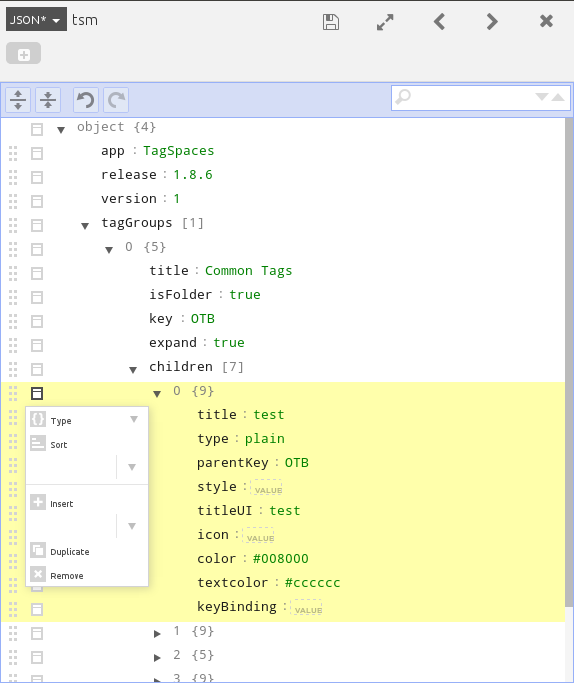 And yes, here you can edit also the JSON file with the tag groups exported from the application. So you can customize the tags you want to distribute.

In order to see how you import the JSON file with the tag groups, read this blog post. In addition, now all tag groups will be imported and not only the first tag group as in version 1.8.5.

Drag & Drop of files in TagSpaces#

We have done also some changes in the dialogs of the application, hoping to increase the overall usability of the product. Now all input text boxes have a validator, which is making the input box red if the input does not comply with requirement. It describes also the given requirement.

We are now automatically focusing the first input field in a dialog, enabling the user to immediately start typing. In addition we rework the color chooser dialog allowing the choose convinietly any color.

Another big change comming with this release is the making of the Chrome extension read-only and renaming it to TagSpaces Lite. This step is needed due the phasing out of the NPAPI functionality in the Chrome browser, making the renaming of files in Chrome impossible. So from now on TagSpaces in Chrome can be used only for browsing of your local content, if you wish to have the previous functionality you have to install the TagSpaces application for your platform (Windwos, Linux or Mac).

In adding initial russian translations was added thanks to darvin and ijon and TagSpaces can now open BMP files. We have integrated a so called natural sorting for the columns of the perspectiveList. Last but not least we added tow new key bindings for edit document ctrl+e and adding tags ctrl+t to current file selection.

Version 1.8.5 was released some weeks ago, and now is a high time to present the major new features provided by it.

One major new functionality is the ability to import files in TagSpaces by dragging them from your native file manager or desktop to TagSpaces.

After dropping of the file(s) in the currently opened folder, a dialog appears, where the user can choose between copying and moving of the dropped files. 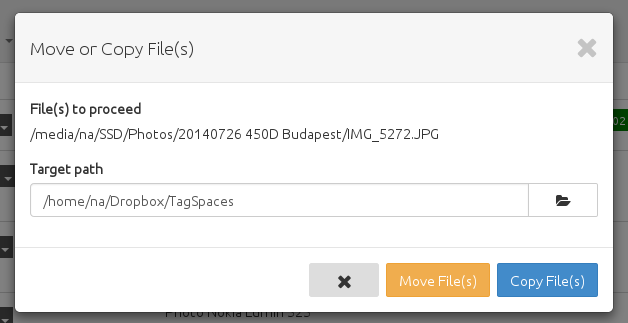 The same dialog can be triggered manually by a toolbar button emphasized in the next screenshot with a red line. This way the user can move or copy the currently selected file to a some other location.

Starting with this version it is possible to duplicate files. The operation can be triggered in the menu of the currently opened file. To the name of the newly create file will be added the current date and time. 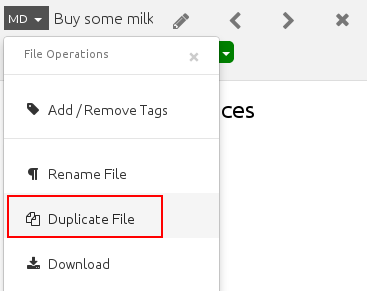 One other small addition to this version is the implementation of a viewer for .url, .website and .desktop files. This is basically enabling you to use TagSpaces as a bookmark manager. .url files can be created for example in Windows by dragging and dropping over the desktop a website from your browser. .desktop files are the alternative to the .url files in Ubuntu.

Once you open such a file, a button with an URL will be shown in the viewer, allowing you to open this URL in your default browser.

Another long awaited feature was delivered with this release, allowing you to transfer easily tag groups and tags between different installations of TagSpaces (on different devices). It is currently not started by default and have to be activated in the experimental tab of the settings. 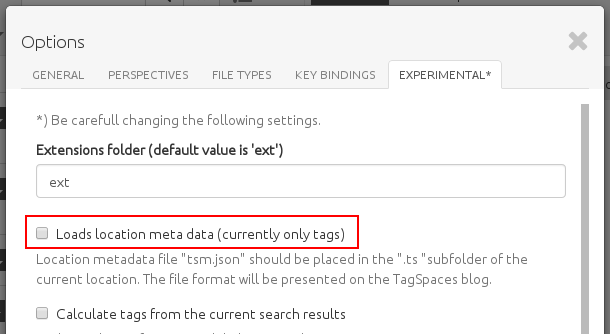 Once activated, by opening of a location, TagSpaces will try to find and load the tsm.json from the .ts folder which should be placed in the root of your location. The tsm.json files, should be in the following format:

After successfully loading of the file a new tag group called "TagGroup 1" containing the tags "Tag1" und "Tag2" will be added to your tag library. In the next release of TagSpaces we are planning a TagGroup export functionality, with which the user can easily create tsm.json files.

Note: In order to distribute the tsm.json file to other devices and since .ts is a hidden folder, allow your sync software to include hidded files while syncing.

Note: Please consider this feature as experimental and not production ready.

In the dropdown menu of a tag group the users will find now a "Sort Tag Group" functionality. This command will sort the tags in the current tag group alphabetically. This could be useful if you have tag groups with many tags. 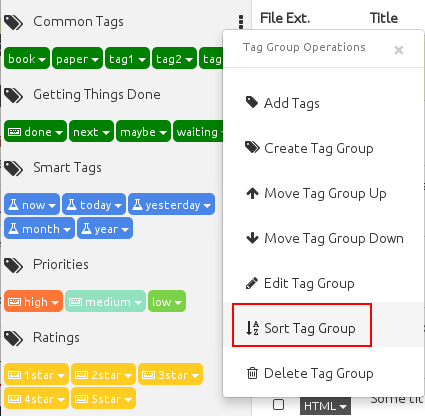 In addition spanish (thanks to gjasso) and initial ukrainian (thanks to 235) translations were added to the project. And now if you create a new file in TagSpaces it will be opened automatically in edit mode.

We just released version 1.8.3 of TagSpaces including the following enhancement: 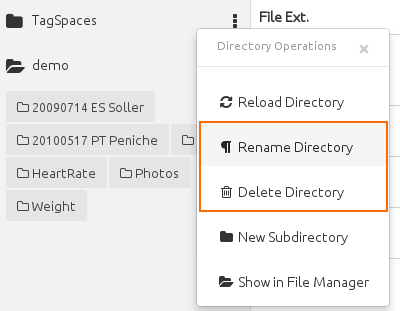 This week we released version 1.8.1 of TagSpaces, featuring the following improvements and bugfixes: 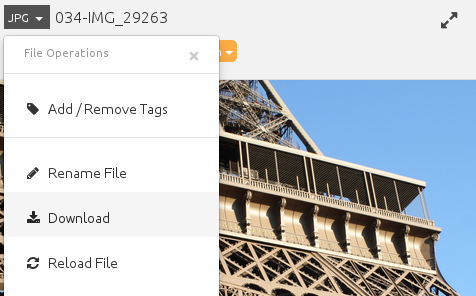 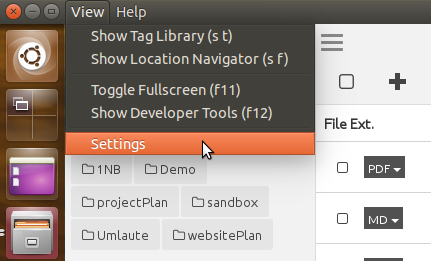 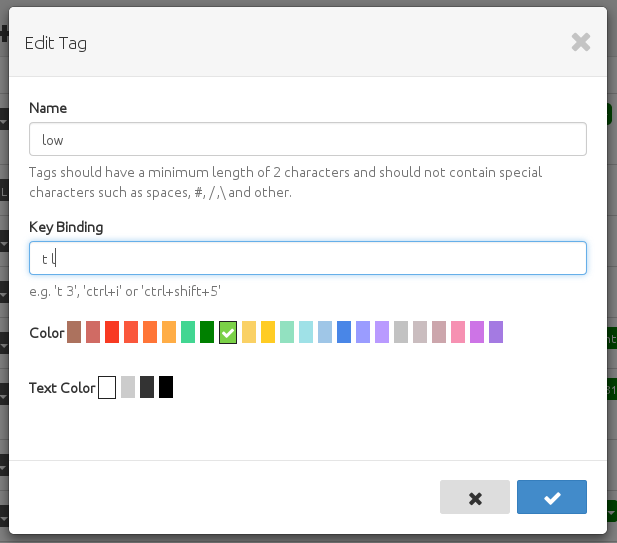 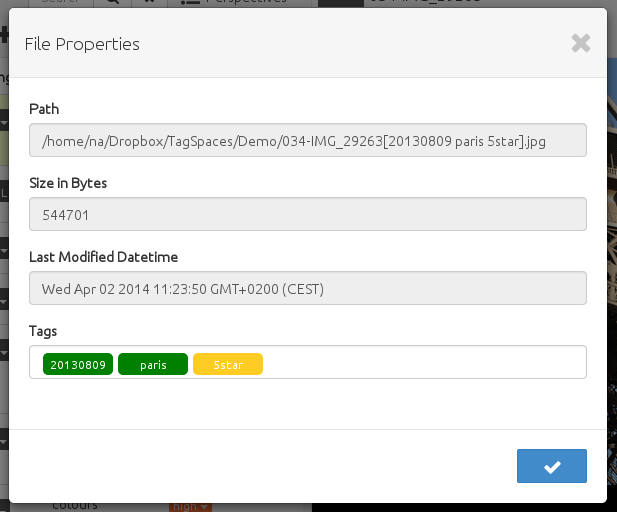 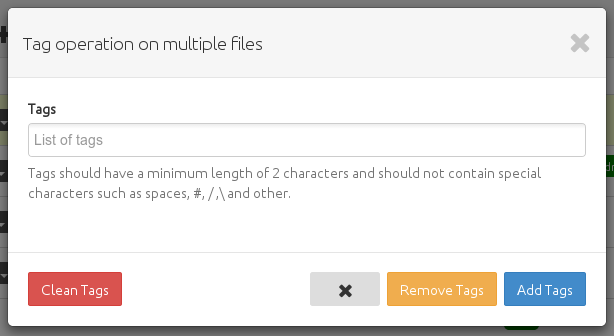 Almost since the very first releases of TagSpaces back in the 2013, many users did requested a server based version of TagSpaces. They wanted to use the convinient tagging workflow of TagSpaces on their self hosted ownCloud or in general WebDAV instances. So starting from today this is possible, TagSpaces can now run on servers and once installed you can access your files from anywhere.

In order to test the hosted version you need a working WebDAV server. The current release was tested with success on ownCloud which is based itself on the sabre/dav WebDAV server. On Ubuntu my installation steps are the following: 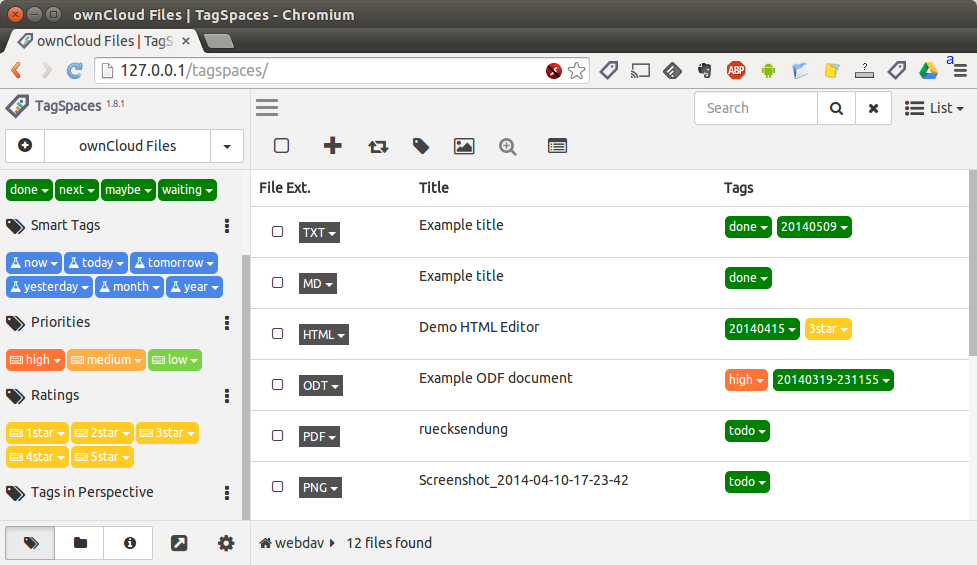 The current version can of the WebDAV version can be downloaded from here. Please note, that current status of the implementation is a technology preview, which is NOT suitable for production use yet !!!.

The first new languages beside english are:

Any other translations are welcome on the Transifex's project for TagSpaces. 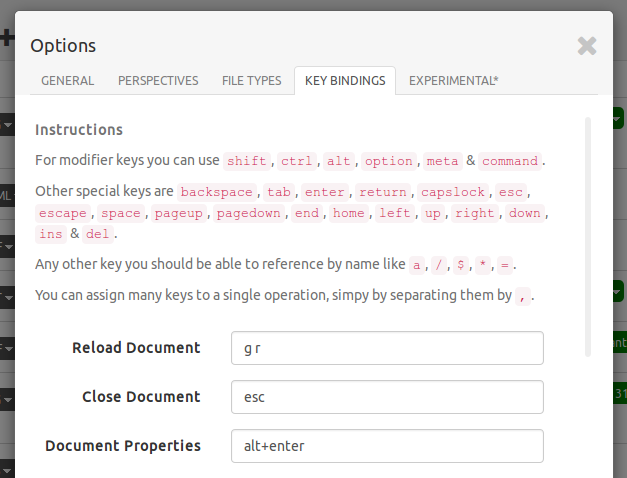 As you can see from the screenshot you are able to create google mail like shortcuts as g r. You can also add two or more shortcut to a single action by simple separating with , as in left,up

As usual, you can find the full changelog of this release on the github

Recently I gave a talk on the quantified self meetup in Munich. In this talk I presented how TagSpaces can be used to manage your health data. Please find here the slides from this talk:


And here is the complete presentation transcript:

File System as a Database

These days there is a real temptation and it’s funny in some strange way to categorize things not only in real life but also in the digital space. To define and categorize music, movies, books, games and another things is catchy. The problem is, that it’s very subjective. For instance, for somebody one book can be "science fiction" but for another "alternate history". It’s based on someone else’s subjectivity.

Tagging and tags is fresh and better alternative of categorizing and grouping things. Tagging allows people to call thing with their own words. They don’t need to conform with keywords or categories in internet created by somebody else. Allow them to describe what they’re seeing in their own words, to imbue the experience with their own meaning. Tagging spares of your time, it creates a variety of tags in different sites and can make the searching for a specific song or a movie or a book or whatever you’re looking for much more easy and faster.

Tags are personal thing. Tagging something is your emotional response and not simply a taxonomic decision. With using tags, people have the control to define things in the web - not only for music, literature, games and movies, but also public websites, data repositories and consultations. Tagging is a new indirect way of control to express your mind and to call things your way - you can call it a "form of freedom of speech" if you want to go that far. Tagging is a power to create your own genres in movies and music for example.

There is also some negative side of tagging and tags - the photos. Not everybody is pleased when is tagged in a photo without his permission- mostly on Facebook. But at the same time tagging is the best way to group and categorize all of your large amount of photos scattered in different folders in the hard drives.

Despite the fact that the version number looks as a minor release, it offers some bugfixes. It also has the following new features: 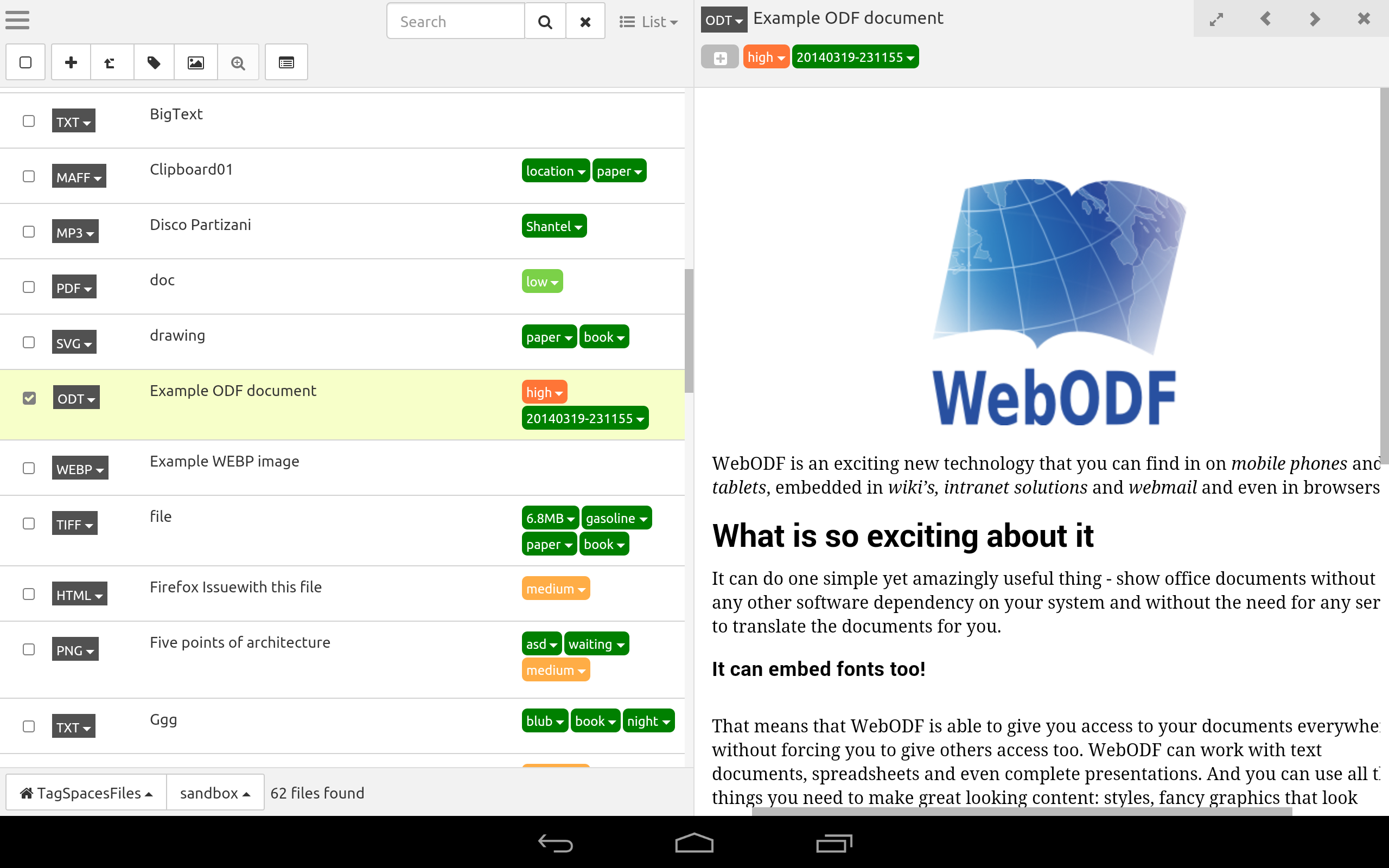 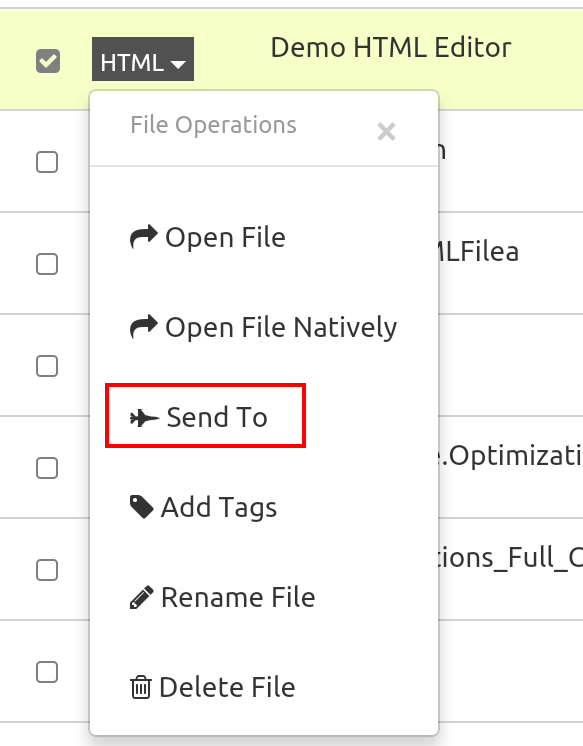